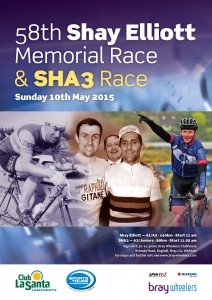 Bray Wheelers Cycling Club have received a major boost to their plans to host the 58th edition of the Shay Elliott Memorial race in May with confirmation that Club La Santa and Sports Tours International are to sponsor the race.

The one-day race is the toughest and one of the longest running events on the domestic calendar and Bray Wheelers C.C. have been working hard in recent years to cement its status as the race that everyone wants to win. A field of 200 riders are expected to compete in the prestigious event on Sunday, May 10th with a 140 kilometre race for A1 and A2 riders and a 90 kilometre race for A3 and Junior riders, with both routes including the decisive climb over Glenmalure.

“We are delighted that Club La Santa and Sports Tours International are supporting our ambition to continually develop the race which now caters for the top A1 and A2 riders in the country and those coming up through the A3 and Junior ranks,” said John Spain, Chairman of Bray Wheelers C.C.. “We introduced the A3 and Junior race last year and it proved to be a massive success. It takes a tough rider to win either race and the undulating terrain and climb over Glenmalure, where both races pass the Shay Elliott Memorial and where the King of the Mountains jersey will be contested, is guaranteed to be decisive,” he added.

“Club La Santa and Sports Tours International are delighted to be associated with this event and the celebration of Shay Elliott’s life. Not only is our involvement a great opportunity to engage with the cycling community in Ireland but we are also proud to be recognising one of Ireland’s most talented and acclaimed cyclists,” said Chris Bird, CEO of Club La Santa and Sports Tours International.

The Shay Elliott was first organised by Bray Wheelers in 1958 having been devised by Joe Loughman. It was known as the Route de Chill Mhantáin at the time but later changed its name to celebrate the memory of Elliott, a prolific one-day rider, renowned for becoming the first Irishman to wear the Tour de France race leader’s yellow jersey. While Sean Kelly remains the only rider to have won the race as a junior, the performance of Eddie Dunbar in finishing second to Damien Shaw in 2014 and his impressive performances for his new NFTO team is already a talking point among those who have set their sights on winning this year’s race. With the race boasting an illustrious list of previous winners including Peter Crinnion, Peter Doyle, Pat McQuaid, Sean Kelly, Martin Early, Philip Cassidy, David McCann, Ciaran Power, Malcom Elliott, Dan Craven, Tim Barry, Philip Lavery and Damien Shaw, it is clear that it takes an exceptionally talented rider to secure victory.

“I’ll be back to try and get my name on the Shay Elliott Memorial for 2015,” said 2014 winner Shaw. “As one of Ireland’s showpiece races it’s guaranteed a great amount of respect from the domestic peloton. Part of the prestige of the Shay Elliott is that over the years so many great riders, national and international, have graced the event. Hopefully this will continue for 2015 and beyond,” he added.

The 140km Shay Elliott race for A1 and A2 riders starts from the race HQ at Bray Wheelers clubhouse at 11 a.m. on Sunday, May 10th, with the race for A3 and Junior riders starting five minutes later. The clubhouse will be open from 8.30 a.m. on the day.

Spectators planning on watching the race unfold at Glenmalure will need to allow time to take a viewing spot by 12.30 p.m. for the A3 and Junior race, with the riders in the A1 and A2 race scheduled to follow half an hour later. Following the climb, both races will make their way to Laragh and to the finish at Newtownmountkennedy Industrial Park via Weston Gates and Killiskey, with the riders expected to finish between 1.30 p.m. and 2.30 p.m. respectively.