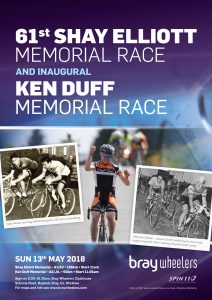 The one-day race is the toughest and one of the longest running events on the domestic calendar and Bray Wheelers have been working hard in recent years to cement its status as the race that everyone wants to win. A field of 200 plus riders are expected to compete in the prestigious events on Sunday 13th May 2018 with a 156km route for A1/A2 riders, and a 92km route for the Ken Duff Memorial for A3/Junior/Women riders, with both routes including the decisive climb over Glenmalure. Over 100 volunteers from Bray Wheelers are involved in organising the two races.

The Shay Elliott was first organised by Bray Wheelers in 1958 having been devised by Joe Loughman. It was known as the Route de Chill Mhantáin at the time but later changed its name to celebrate the memory of Elliott, a prolific one-day rider, renowned for becoming the first Irishman to wear the Tour de France race leader’s yellow jersey. While Sean Kelly remains the only rider to have won the race as a junior, we expect a fiercely fought battle between the top in-form riders of 2018 season, riders like James Davenport, Philip Lavery, Sean Lacey. With the race boasting an illustrious list of previous winners including Peter Crinnion, Peter Doyle, Pat McQuaid, Sean Kelly, Martin Early, Philip Cassidy, David McCann, Ciaran Power, Malcom Elliott, Michael O’Donnell, Dan Craven, Tim Barry, Philip Lavery, Damien Shaw and Martyn Irvine, it is clear that it takes an exceptionally talented rider to secure victory.

The Shay Elliott Memorial for A1/A2 riders starts from the race HQ at Bray Wheelers clubhouse at 11am on Sunday 13th May, with the 92km race for the Ken Duff Memorial for A3/Junior riders starting five minutes later. The clubhouse will be open from 8.30am on the day.

The route for both races leaves the clubhouse neutralised, and merges onto the N11, where the racing begins in Kilmacanogue, and proceeds to Kilpeddar – where the prime for the green jersey in both races will be contested after 12.8km – the race then proceeds to Ashford and Rathdrum. The A1/A2 riders will continue to Ballinaclash where they will complete a new 21km loop three times before tackling the climb of Glenmalure after 116km of racing, while the A3 and Junior riders will turn in Rathdrum for Greenane, meeting the climb of Glenmalure after 53km of racing.

Spectators planning on watching the race unfold at Glenmalure will need to allow time to take a viewing spot by 12.25 for the A3/Junior/Women’s race, with the riders in the A1 and A2 race scheduled to follow later at 13.38. Following the climb, both races will make their way to the race finish at Djouce via Boleynass, Roundwood and Ballinastoe with the riders expected to finish between 14.48 and 13.30 respectively.