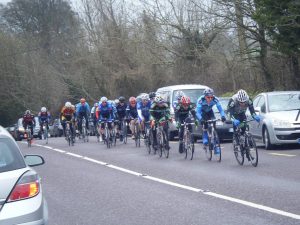 On Saturday at the Harry Reynolds memorial race in Balbriggan on Saturday, Joe Christian placed 6th to earn another upgrade, this time to A1 category. This must surely have been one of the shortest times ever spent as an A2 by anyone! A great achievement to go from A3 to A1 in less than 2 months of the race season. In a hard fought race a break went away and was caught only 500 metres from the line to result in a sprint – where Joe managed to get 6th place. As Joe was already on the maximum of 14 points, so this pushed him up into the A1 category. So congratulations to him on his continued success. 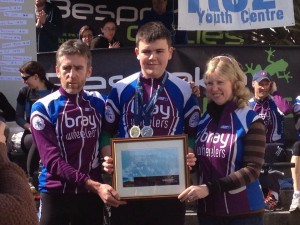 Also on Saturday members of the club were involved the Tour de Bray fundraising event for the Hi Rez Youth Centre outside the Holy Redeemer in Bray. Three teams from the club took part in racing on stationary bikes, fundraising for the youth centre. It was here at this event that Bray Wheelers presented Stuart Brierton (Bray’s Olympic Hero) with honorary life membership of the club – in recognition of his fantastic achievement in winning gold and silver medals at the winter special Olympics earlier this year. Stuart who’s father was once in Bray Wheelers was presented with a certificate of membership and club jersey, in acknowledgment of his sporting success. 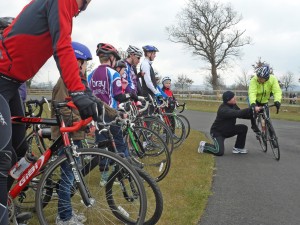 A large number of youth riders also turned out in Corkagh Park on Sunday for a great day of training and racing.

There was racing in Balbriggan and Fermoy on Sunday. In Balbriggan Jason Howick, Sean O’Ruaithil and Derek Cunningham took part. In the A4 race Ruairdhi O’Sullivan raced and was involved in the final sprint In Fermoy Joe Christian rode his first A1 race and was involved in chasing down an early breakaway. Sam Gilmore took part in the under 16 race in Fermoy. The under 16 race was 4 laps of a 10km circuit. With bad cross winds the bunch split early on with Sam finishing in the second group out of the placing.

In the Vets racing on Sunday there was a crash involving a large amount of riders. Unfortunately there were several broken bones and severe injuries. Dermot Hickey of Bray was involved in tending to the wounded until ambulances arrived.