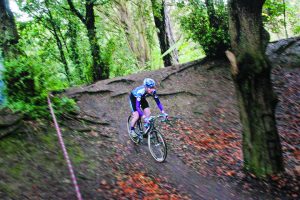 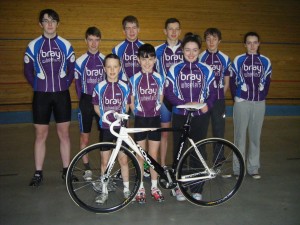 In a busy week and weekend for Bray Wheelers Sean O’Tuathaill took part in the National cyclocross championships, a large contingent from the club were away in Holland training on the velodrome, there was a coaching and membership night in the clubhouse on Wednesday night, the club hosted the second round of the Women’s Commission’s winter training camp in the clubhouse and the rest of the youth riders took part in a road and off-road spin in Roundwood on Sunday afternoon. Race training on Tuesday nights has returned and also race training spins at the weekend – more details of that to follow.

The coaching and membership night in the clubhouse on Wednesday night was very well attended with Bray having it’s largest amount of junior riders in many year this year and 8 or so of them took part in the coaching evening along with some more new faces, who hope to race this year for the first time. Thanks to Mark Murphy, Mark Loughran and Ger Ivory for some very informative talks.

The second round of the Women’s Commission’s winter training camp in the clubhouse took place on Saturday morning with 41 women cyclist of all levels from all over the country signed up for the event. They had signed on from as far away as Killarney cycling club and Northern Ireland. Unfortunately the morning was icy so the planned cycle had to be kept to the coast but 4 different levels of spins headed out. After lunch in the clubhouse there were talks on training, nutrition and the racing calendar for the year. Many thanks to all the club members who helped out in guiding spins.

Sean O’Tuathaill, who has had an extremely successful cyclocross season so far this year took part in the National CX Championships in Northern Ireland over the weekend representing the club very well – unfortunately he was just out of the medals.

A contingent of 12 people from the club were away training and racing in the indoor velodrome in Alkmaar and Amsterdam over the weekend. Bray Wheelers had the biggest amount taking part in this, proof of Bray’s dominance on the track in recent years, all thanks to the excellent coaching from Ger Ivory. The youth riders who took part were Deirbhle and Caoimhe Ivory, Sam Gilmore, Sean Lee, Ben Docherty, Robert Murphy, Harry Brooks, Archie and Will Ryan.

The rest of the youth riders took part in a road and off-road spin in Roundwood over the weekend. The younger riders went on a spin around the lakes while the older ones went on a road spin. Many thanks to Mark Loughran who organises these events.

With the new year thoughts and training has turned to the upcoming race season and as part of the preparation Tuesday night race training has returned from this Tuesday, from the Kilmac roundabout at 7.30. Anyone taking part must be a club member and have either Cycling Ireland membership or IVCA membership. They must be kitted out with a front and rear light and a fluorescent jacket. Also race training spins are now going out at 9 am and 9.30 on Saturday and at 9 am on Sunday from Kilmac. These will be split into smaller groups.

The next winter training/accreditation track day is on Sunday week the 26th at 11am. This is of interest to anyone in the club interested in getting riding the track next year and getting in some training prior to the season.