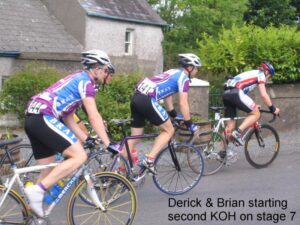 Last Tuesday night several Bray Wheelers were racing at Enfield. Unfortunately Joe Christian was brought down in a crash near the finish, when the groups merged. Sam Gilmore took part in the under 16 race.

Last Thursday was the Bray Wheelers annual Time Trial Championships over a 10 mile course on the N11 from Kilpeddar to Coynes Cross and returning back the N11. The great weather ensured a high turnout with 44 taking part. Derek Cunningham was crowned club time trial champion with a time of 22:47 for the 10 miles, with Anto Dunne in second and Paul Lee and Ed O’Brien in joint third place. Rebecca Harris was first lady and Noel Conway first Vet. Sam McAllister took the junior time trial title in a time of 26:01, to add to his Harry Dawson league victory of the previous week – with Sam Gilmore first underage rider in a time of 27:17.

Many members of the club took part in the Wicklow 100 and 200 on Sunday in glorious summer sunshine and temperatures in the early 20’s. While the weather was fantastic and welcomed by all the heat might not have helped on the many climbs around Wicklow.

Sunday’s open race was in Navan Co Meath. Joe Christian and Derek Cunningham took part in the A1/A2 race with Derek getting 3rd unplaced A2. Sam Gilmore rode very well in the under 16 race and was well in contention throughout, but was unfortunately brought down in the sprint for the line.

Bray Wheelers are running the Christy McManus and Roundwood GP open races – along with underage racing this Saturday in the Roundwood area – so a busy day is in store for everyone.