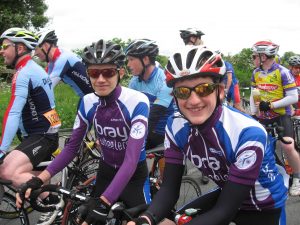 Sam McAllister (left) and Anthony Clarke at the start of the Boyne Valley GP. Both lads rode a great race and just narrowly missed out on the junior prizes.
by Beryl Gilmore, Club PRO

Will and Archie Ryan were away recently in the UK, racing in the North West international Youth Tour. This is a stage race run over several stages in the Blackpool area. They both did very well in a huge international field. There were over 50 riders in the under 12 boys category alone. The boys finished just over 2 minutes down with Archie in the top twenty and Will not far behind.

The Women’s League had no races this week – concentrating instead on training and learning race skills on Tuesday night in Corkagh Park. The racing resumes this week with the start of another league. Bray’s Michelle Carter and Sarah Pratt have to be favourites after their domination of the earlier league. Also on Tuesday night Bray Wheeler Paul Lee did a fantastic time in the Vets League 25 mile time trial with a storming time of just over 57 minutes. Dermot McGrath also did a great time winning his age category.

In the Harry Dawson League the first groups weren’t caught and stayed away to scoop up all the placings. This suited Sam McAllister who went into the race the clear leader and with none of his rivals for the overall being placed he wrapped up the league win. This was a great result for Sam McAllister a junior who has improved immensely and is going extremely well this season. So congratulations to Sam and hopefully this is the first of many wins. In the race itself on Thursday night David Hayes got a well deserved win from Mark Mulcahy in second and Craig Gilmore was third in only his third club race, Jean Bader got 4th with Eamonn Kearns 5th and Margarete Clark in 6th place.

The leisure riders in the club have also been busy in the last few weeks, taking advantage of the recent good weather, with several sportives held in the Wicklow area. Many of the leisure group are in training for the Wicklow 100 and 200 which takes place this month and these sportives tested their fitness.

This Saturday several of the Track riders were in Sundrive Velodrome for The Duane Delaney Memorial race. Jason Howick, Janos Kohler and Sam Gilmore all took part.

Meanwhile further North Derek Cunningham was taking part in the Ras na Dun Ghall. After a slow start Derek moved up to 12th overall on Saturday due to a really good hill climb time.

And in the south of the country Joe Christian made a welcome return to form finishing 4th in the Blarney Village Criterium on Saturday evening. Sam Mc Allister fresh from his win in the Harry Dawson League and Anthony Clarke both juniors raced the Boyne GP in Slane on a tough circuit over 72km. There was a big field of 60 or 70 riders and a fast average speed(37.5km/h). Sam finished in the top 15 or 20 riders, with Anthony just behind. They were 4th and 5th Junior, just missing out on prizes! So congratulations to everyone on a great week of results and hopefully the sign of more to come.