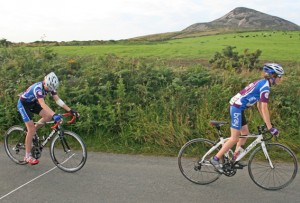 In the women’s Criterium League on Tuesday night Michelle Carter won the sprint race to take the overall lead away from her team mate Sarah Pratt. Michelle is now in first place overall on 137 points with Sarah second on 130 points, so it is a Bray one, two with just one event left in the league.

At the Track league on Wednesday night there were several results for the Bray riders in the C league race with Sean Lee taking a couple of wins and Martin Gilmore a second place. Sam Gilmore, recently promoted, did well in the B league. Will and Archie Ryan continued their domination of the D group – with several firsts and seconds – along with Thomas Pickford, who was riding very well.

On Saturday Sean Lee and Sam Gilmore, both under 16, took part in the Conway Baxter youth race in Newbridge. Sean Lee did a really good time in the mornings time trial finishing in 7th place. Sam and Sean finished well in the afternoon stage in what was a really long tough race.

Sunday saw the 54th running of the Shay Elliot memorial race around the roads of County Wicklow and over the climb of Glenmalure. This involved a huge input from club members and thanks to everyone who helped out on the day. Over 80 top class riders A1 and A2 lined out on the start line for the tough 140km race. Three Bray Wheelers were included in the field – Derek Cunningham, Jason Howick and Geoff Robinson.

Damian Shaw of Aquablue took the sprint on the N11 near Newtown and he was also first over the climb of Glenmalure. A break of 4 went away just after Aughrim and as was expected the climb broke the race up with two Eurocycles riders going away from the break of 4. They stayed away to the finish with Conor Murphy the eventual winner and Thomas Martin his team-mate making it a Eurocycles one, two. Eoin Morton of UCD came in, in third place and Damian Shaw, who had won the earlier sprint and King of the Mountains hung on for 4th place. Derek Cunningham was first Bray Wheeler home. First unplaced A2 was Eoin Greene of Iverk Carrick Wheelers.