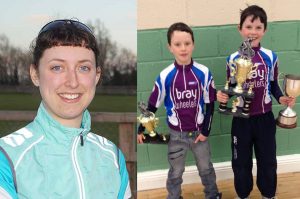 Bray girls, Michelle Carter and Sarah Pratt continued their domination of the Women’s Criterium League, with a win for Michelle and a very close second for Sarah after a sprint finish in the B race. After round 4 of the league on Tuesday evening Sarah is still leading overall with 100 points but Michelle’s win has brought her up to a close second place with 97 points.

The track league started back on Wednesday night with Bray well represented in several categories. Most of the youth and senior riders have been upgraded this year to the B league which has made the racing more competitive.

Thursday night the Harry Dawson Club League continued with a road race from Calary to Annamoe and back. The front groups were not caught by the chasing groups and Paulo Piccenci was the winner, who won well getting a good jump on the group he was with, followed in 2nd second place by Paul Mahon and Fiona Duggan came in, in third place.

Saturday turned out a nice dry day for the several sportives and randonees which many club members took part in. Bray was well represented at the Cycle4life charity cycle in Meath and at the Orwell Wheelers Randonee in County Wicklow.

At the Vets races on Saturday morning Paul Lee was victorious – with a great win in his race – winning the sprint from a small break with Noel Conway in 6th and Anto Crean in 7th place. There was a large Bray turnout in all the Vets categories.

Several of Bray’s youth racers were at the Kanturk 2 day youth race. In the under 12 event Will Ryan finished second overall narrowly missing out on the overall win by only 2 points. So congratulations to Will on doing so well. In the three stages Will finished 1st, 4th and 3rd in the stages. His brother Archie Ryan finished joint third overall, with a 4th, 3rd and 2nd in his three stages. Archie did a really good time trial and was really happy to beat his brother in the time trial and on Sundays stage.

In the under 14 race in Kanturk Ben Docherty rode well in the first 2 stages, did a really fast time in the time trial and was 5th under 14 going into the final stage, but he was unlucky to crash on the 3rd stage. He got back up after his crash and finished the stage despite his brakes sticking.

At the Frank O’Rourke Memorial Race in Camross in County Wexford on Sunday, under 16 rider, Sam Gilmore got away in an early break staying away to the finish to hold on for 6th place. Joe Christian took part in the A1 race while Ed O’Brien and David Hennessey rode very strongly in the A3 race to finish with the bunch. Ruardhri O’Sullivan represented the club in the A4 race, getting into an early break which was reeled back in and he finished in the bunch.