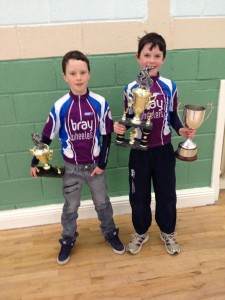 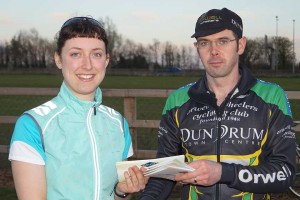 This week started out on a really good note for Bray Wheelers with Sarah Pratt and Michelle Carter getting 2nd and 3rd respectively in the Women’s Crit League in Corkagh Park on Tuesday night, to leave them 1st and 2nd on the B Leaderboard. This is an especially good result considering both are new to racing. In the handicap race at Corkagh Park’s purpose built cycle track, the girls were first and second in the bunch sprint, unable to catch the person in front before the line came.

Thursday night saw the first race in the Harry Dawson League starting and finishing on Calary over a tough circuit through Roundwood and around the lakes. In the CP race it was the fifth group that did all the damage, catching and passing the groups in front and came to the line first along with some of the remnants of the fourth group who managed to survive the pace, with Stuart Biggar winning the sprint for first place from 2nd placed Liam Murphy, 3rd Sean Lee, 4th Jason Edwards, 5th Sam Gilmore, 6th Simon Edmonds, 7th Mary Dawson, 8th Anthony Clark, 9th Redmond O Toole and in 10th place Dermot Hickey. The ladies league results, as part of the same club race – are as follows 1st Mary Dawson, 2nd Fiona Duggan, 3rd Murial Haire, 4th Sarah Pratt, 5th Orla McEvoy and in 6th place Rebecca Harris.

In the Vets racing on Sunday – it was a good result for the Bray racers with Anto Crean placing 3rd, Paul Lee 4th and Damian Doyle coming in 5th place.

The weekends racing moved to Bohermeen in Co Meath for the Waller Cup on Sunday. This had racing for all categories and age groups with Bray well represented. In the under 12 race Will Ryan and his brother Archie followed on from their recent 2nd and 3rd places over the last few weeks – by winning the Under 12 Waller Cup and placing second. Congratulations to Will for winning and to Archie on coming second. A great result for the boys. Sam Gilmore took part in the under 16 race, riding well and finishing in the bunch in 9th position. There was a large contingent of A3 and A2 racers, along with Joe Christian in the A1 race. Unfortunately none of the racers managed to place. Sarah Pratt represented the club in the Women’s National League Race. Ger Ivory did a track training session on Sunday afternoon for anyone wishing to do their accreditation and race the track league this year. Many thanks to Ger for his time and effort in putting everyone through their paces and doing such a great job.