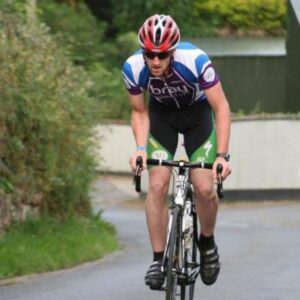 June 8th 2014
At last weeks Deenside Cup in Kilkenny Darragh Byrne scored a notable victory winning the A4 race and earning him an upgrade to A3 status. This followed on from his win in the club race the previous Thursday night, showing he is in very good form. John Spain got a hard earned 10th place in the A3 race at the same event.

This weeks club race was a hilly interclub time trial finishing on Luggala. The results were – John Lynch first in a storming 40.08, with Anto Dunne second in 42.23 and third was Geoff Robinson in 42.24. In fourth place was Dave Peelo at 42.31 and Ben O’Higgins very closely behind in 42.34. These are the actual times and handicapped times will follow.

The Duane Delaney took place at Sundrive Velodrome on Saturday with Jason Howick getting a podium finish in the A group and doing a storming 500m time trial. Edward Kearns got a great win in the C group and scored high enough to finish 4th overall. Ben Docherty finished 4th in the C group – the only under 14 taking part with the adults. Sam Gilmore and Harry Brooks rode well doing good times in the 200, with Harry riding well in the Kilo Dash and Sam riding well in the scratch race.

A large contingent of Bray riders took part in the Cycle 4 Life in aid of Temple Street Childrens Hospital on Saturday also having a great day out in improving weather. Also a group of Bray riders including Noel Conway and Barry Cahill rode the 295km Granfondo Milan San Remo in Italy on the course of the famous Milan San Remo road race.

Many other members of the club took part in the Wicklow 100 and 200 around the hills of Wicklow on a showery Sunday.

This weeks youth spin will take place from Ballinastoe, Roundwood, on Monday night at 7.30 and the following weeks spin is from Greystones. New members are always welcome. The last race in the Harry Dawson league takes place on Thursday night from Calary and the big event of next weekend is the Bray Wheelers promoted Christy McManus and Roundwood GP cycle races.