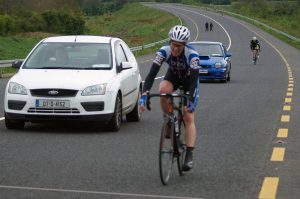 This week was the start of the Harry Dawson League. The race was a handicapped race, starting in Calary, doing a lap of the Roundwood lakes and finishing back at Calary, 26km in total. Two riders from the first group managed to stay away and Craig Gilmore won in a sprint finish from Mary Dawson. Paul Mahon got third place in a bunch sprint from Pat Byrne. The points in the women’s league go to Mary Dawson in first place with Eilish Bradshaw second.

Wednesday night track league at Sundrive saw a lot of good results by Bray Wheelers. There were good results from Sean Lee and Edward Kearns in the C league. Sam and Craig Gilmore rode well in the B league. Thomas Pickford got a placing in the D (youth) category.

Sam Gilmore was back at Sundrive on Saturday afternoon for junior development squad training which went really well.

Geoff Robinson and Graham Kearns rode the Kanturk three day, in Cork, over the weekend, both riding well in all stages and Geoff finishing in the top thirty.

Sunday morning had a good turnout for the IVCA vets league. The Bray riders rode aggressively throughout, with a fine win being taken by Noel Conway. Noel managed to get away and win on his own with a big gap back to the bunch.

The next round of the Harry Dawson League next Thursday night is a CP from Calary to Annamoe and back, sign in from 7pm with race starting at 7.30pm sharp.

The next youth spin is on Monday May 12th meeting at Ballinastoe for 7.30pm, where a road and an off-road spin will take place. New members are always welcome and membership is free for the under 14’s.