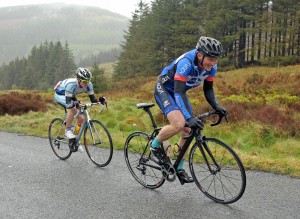 This week the club racing made a welcome return with an interclub time trial taking place on the N11. The race calendar moved to the home county with Bray Wheelers Cycling Club hosting the prestigious Shay Elliott Cycle race and supporting A3 event.

The interclub TT was an 11km timed event in conjunction with our neighbouring club Sorrento Cycling Club. There was a good turnout for this with almost 60 cyclists taking part. It was a fine evening on Thursday with some really good times being set and a lot of people setting personal bests and much improved times on last year.

Fintan Ryan junior of Sorrento Cycling Club set the best time on the night with a blistering time of 14.44. Ed O’Brien was the first Bray rider home in an excellent time of 14.55 following on from his good showing in the Gorey three day last weekend. Noel Conway was second Bray rider and Anto Dunne third.

On Saturday Bray hosted the Shay Elliott memorial race which is an A1/A2 event and for the first time ever we put on an A3 event the SHA3 which proved to be a huge success. The turnout was good and hopefully this race will be even bigger next year. This was a tough gruelling race around the hilly roads of County Wicklow and over the climb of Glenmalure and the weather was not kind to the riders with the cold and rain adding to the toughness of the race.

A large contingent of Bray riders took part in both races. Ed O’Brien and Geoff Robinson did the A1/A2 race and John Spain, David Hennessy, Ian Murphy, Graham Kearns, Richard O’Hanrahan and several others taking part in the A3 event. Unfortunately Ed O’Brien had a mechanical early on. Geoff Robinson did well finishing up 4th in the A2 race and Richard O’Hanrahan was first unplaced Bray Wheeler in the A3 race.

The next youth spin is on Monday evening the 28th April from Shanganagh at 7.30 – new members always welcome. Next weeks club race is a 26km CP from Calary with sign on from 7pm.