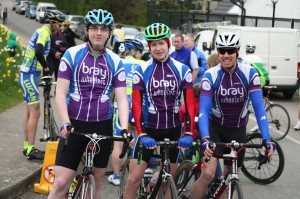 This week the racing continued in Balscadden and Stamullen in a series of races run by Stamullen Cycling Club. On Saturday Ed O’Brien contested the A2 event, while juniors Sean Lee and Harry Brooks contested the A3/junior event. On Sunday at Stamullen Geoff Robinson rode well in the A1/A2 event while Ian Murphy, Graham Kearns, David Hennessy and Sam Gilmore junior rode the A3 event.

There was a large contingent of vets contesting the IVCA divided mass start race at Summerhill County Meath and all rode well, dominating the events due to their large numbers.

It is now less than two weeks to go until Bray Wheelers biggest event of the year – the Shay Elliot Memorial race, which will be held on Saturday April 26th on the roads around County Wicklow and over the climb of Glenmalure. So it is all systems go in organising this huge event.

The club races return on April 24th with an interclub 11km time trial on the N11 from Kilmacanogue, starting at 7pm.

Sundrive Velodrome’s track league returns on April 30th for accreditated riders. For anyone wishing to ride the track league there will be an accreditation on April 19th at 2pm.