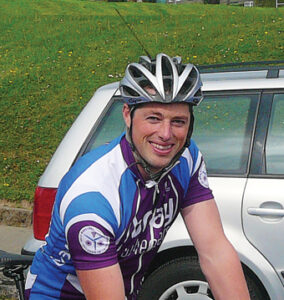 Ras na nóg and other races

Thursday evening saw a welcome return to club racing with the first of the interclub races – a time trial run over 11kms from Kilmac down the N11 and back. There was a record turn out from both Bray Wheelers and Sorrento cycling clubs with over 70 cyclists taking to the start line. This year, along with the usual interclub league there will be an interclub time trial league, and with the interest in time-trialling it is envisaged that this will be hotly contested by the fast men and women of both clubs. The weather on the night was similar to last year – wet but with even more wind to slow everyone down. John Lynch was fastest on the night with a storming time of 14.23, almost one minute faster than the next placed rider, with Bray taking 6 of the top ten places.

At the weekend racing moved to Drogheda with the staging of the youth race the Ras na nóg and with senior racing on both Saturday evening and Sunday. Representing Bray at the Ras na nóg were Archie and Will Ryan in the under 12 category, Ben Docherty in the under 14’s and Sean Lee and Sam Gilmore in the under 16 race. Saturday started out with a criterium on a short circuit. In the under 12 race Archie and Will Ryan did well to stay in contention in what was a fast paced, action packed race. They did well to place in 4th and 6th place respectively on the first stage.

In the under 14 race, Ben Docherty did well to move up through the field as the laps progressed and finished in a good position in the main bunch. In the under 16 race Sean Lee and Sam Gilmore finished back in the field just a little off the breakaway group. The afternoon stage saw the racing move to a tough hilly circuit near Donore. In the under 12 race Will Ryan managed to get 3rd and his brother Archie 5th after a bunch sprint. Ben Docherty did well in his race finishing just behind the breakaway group. In the first few laps Sean Lee and Sam Gilmore were well in contention in the main group but lost pace in the last lap or two.

The Peter Bidwell Memorial senior race took part on the same circuit on Saturday evening for all categories and Bray was well represented in the A3 and A4 races. John Spain and Graham Kearns rode in the A 3 race. John Spain went down in a large crash and Graham got caught up behind it. Unfortunately Ruadhrai O’Sullivan came down in a crash on the 4th lap in the A4 race.

On Sunday the 3rd stage of the Ras na nóg took place near Donore. Sam Gilmore took part in the under 16 race and raced well for the first four laps riding strongly on the front to bring back a breakaway. Unfortunately he got distanced in the final lap, due to his earlier effort. Ben Docherty rode well in the under 14 race finishing with the main bunch. Will and Archie Ryan placed 3rd and 4th in the under 12 race to finish 3rd and 5th overall in the general classification.

Further south the Vets were in action in a 70km CP in Kentstown. Linus Devlin was away for much of the race and was unlucky not to place, but Bray’s Ger Deegan won the bunch sprint with Dermot Hickey in 6th and Anthony Crean in 7th. So a good result for Bray in the Vets league.

The youth riders were in Sundrive Velodrome for their spin and there was a good attendance, helped by the good weather. Ben Docherty even managed to get there on his way home from the Ras na nóg!