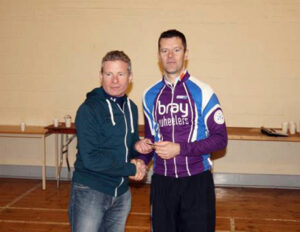 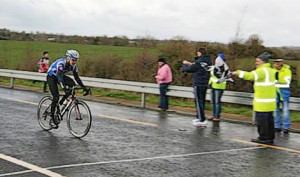 Training intensified in the last few weeks with large numbers out on Tuesday night for training on the N11 and on the Saturday and Sunday training and leisure spins. The IVCA racing will be starting shortly so its all systems go for anyone training specifically for this.

Several Bray riders have also been spotted training at Sundrive Velodrome in preparation for the upcoming track season.

The road race season continued last week with Bray Wheelers competing at the Boyne GP on Sunday. In a race marred by several serious crashes, Graham Kearns was unlucky to be involved in a crash but was uninjured. John Spain and Odhran O’Caoilte finished in the main bunch.

On Saturday of this week a large contingent travelled to the Lucan GP. Ed O’Brien raced in the A3 category. Odhran O’Caoilte, Dave Hennessey and John Spain contested the A3 event. A break of two riders went away and Dave Hennessy tried to bridge the gap to the break, but the finish line came too soon. Dave finished the race on his own in third place a good result so early in the season. Ruaidhrai O’Sullivan took part in the A4 race and finished well in the bunch.

On Sunday Geoff Robinson travelled to Carlow to the tough Des O’Hanlon race and acquitted himself well over a long and tough course.

A large amount of youth riders attended the track on Sunday afternoon in excellent weather for the youth spin at Sundrive Velodrome. The next youth spin is in Corkagh Park on April 6th. New faces are always welcome at the youth events.

New members are always welcome in Bray Wheelers and all details are on the website http://www.braywheelers.com.