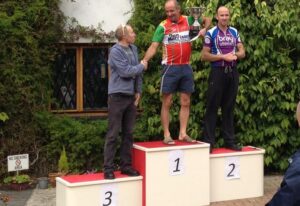 Ed O’Brien earns upgrade to A2

This week saw the last road race of the season the Barrow GP in New Ross along with the Cross Country Marathon Mountain Bike Championships in Ballyhoura and several club and youth spins over the weekend.

Saturday the beginners spins continued with a good turnout. If you have anyone who would be interested in attending these, details are on the website and they are open to anyone age 14 years and over.

Sunday afternoon the youth spin was a mountain bike spin at Ballinastoe in Roundwood.

While the pro riders were battling it out on the roads of Italy on Sunday afternoon, Bray’s racers were showing great late season form in the Barrow GP in New Ross, Co Wexford. On a hard circuit of over 100km in New Ross, Odhran O’Caoilte attacked 5 or 6 times, eventually staying away for over half a lap, while Ed O’Brien tried to block and prevent the break being brought back. Ed also attacked several times, being brought back each time, but on the final climb 5km from the finish Ed O’Brien managed to get away in a 4 man break. Ed led it out for the last 500 metres managing to burn off two of the 4 man break and was just beaten on the line by a wheel length and had to settle for second place.

This second place along with his second place last week earns Ed a well deserved upgrade to A2 category for next year, so congratulations to Ed O’Brien an his upgrade and great results.

Meanwhile at the Cross Country Mountain Bike Championships in Ballyhoura Geoff Robinson won his masters category in a tough competition against a quality field.