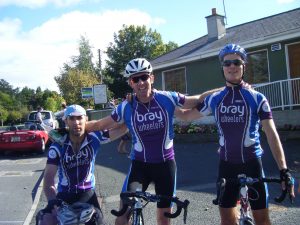 On Saturday at Sundrive a large contingent of Bray riders contested the Leinster Track Championships across all categories from youth to senior. Bray got several medals in the youth category with Will and Archie Ryan picking up a gold and silver Leinster medal each in the time trial and the scratch race. Deirbhle Ivory got a gold medal in the time trial, doing a stormer of a time in the under 16 girls category and a bronze medal in the scratch race. Her sister Caoimhe got two silver medals. Sam Gilmore took part in a very competitive under 16 boys category.

Meanwhile in the senior events Craig Gilmore rode his first Leinsters doing a good time in the time trial and riding the scratch race. Janos Kohler did well getting second in the Senior timetrial event. In the veterans racing there was a good amount of Bray riders, with Jason Howick picking up silver in the 500m time trial and unfortunately placing 4th in the scratch race. Martin Gilmore and Malcolm Goggin also took part with Malcolm unlucky in the scratch race after being involved in an early breakaway.

At the Leinster Road Race Championships on Sunday Bray had 3 riders in the A3 category, one in A4 and one in the A2/A1 race. Jason Howick finished 4th Vet in the A/A2 race just out of the medals. Craig Gilmore was unlucky in the A4 race but the greatest success came in the A3 race.

In the A3 race Ed O’Brien created an early breakaway, going away on his own to be subsequently joined by 4 more riders. This breakaway worked well together gaining up to 3 minutes on the bunch at one stage. At the finish Ed and one other rider jumped away from the breakaway on the final hill with Ed O’Brien just losing out in the final few metres. In the uphill bunch sprint Odhran O’Caoilte was second in the sprint getting past one of the best junior sprinters in the country just before the line. Unfortunately he was just out of the prizes. Colm Ferrari finished well up in the bunch. Due to all three riders placing well – Bray Wheelers won the team medal in the A3 race, a great achievement and congratulations to all three riders concerned.

The Fixx Cyclocross season also got underway on Sunday with Sean O’Tuathaill of Bray showing good form to finish in 5th place overall – just behind the National Cyclocross Champion.

The youth spins have now switched back to every second Sunday afternoon and the next spin in next Sunday the 29th a mountain bike spin at Ballinastoe at 2pm – all underage welcome.