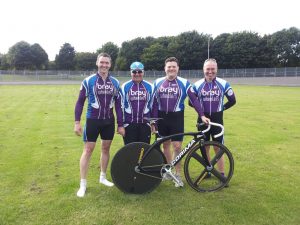 Last week there was a good turnout of people at the bring, buy, sell and swap night at the clubhouse and several people managed to get rid of their unwanted cycling items and clothing.

Saturday Orwell Wheelers ran the Noel Hammond Memorial race as a time trial around the Roundwood, Moneystown area and a good contingent of the club took part, turning in good times all round. In the A1/A2 category Geoff Robinson placed 6th. Of the A3’s Odhran O’Caoilte finished in second place in a time of 51.49 for the 32.5 kilometres, with Rob Magee in 4th and Ed O’Brien in 5th place.

The Veterans track National Championships were also held on Saturday in lovely sunshine at Sundrive Track. There was a good turnout for this – the inaugural Vets Championships with separate Championship events. The Bray team consisted of Jason Howick, Malcolm Goggin, Ger Ivory and Martin Gilmore. In the Pursuit Jason did a good time ending up in the bronze medal ride off but unfortunately had to be content with 4th place. Jason got a Silver medal in the Sprint and a bronze medal in the 500 metre time trial, but was unfortunate to finish 4th in the scratch race. Malcolm Goggin did a good time to finish 6th in the 500 metre time trial and Martin Gilmore and Ger Ivory finished well up in the scratch race.

Sunday saw the running of the Laragh Classic a new race on the calendar on a loop from Laragh to Moneystown, Annamoe and back to Laragh. There were a good contingent of Bray Wheelers taking part including John Spain, Graham Kearns, Sean Greene, Odhran O’Caoilte, Ruairdhi O’Sullivan, Colm Ferrari, Craig Gilmore and Anthony Clarke. Odhran O’Caoilte finished best of the Bray riders in the A3 race finishing in the first group and Colm did well in the A4 race. Anthony Clarke, junior, rode well in the A3 race.