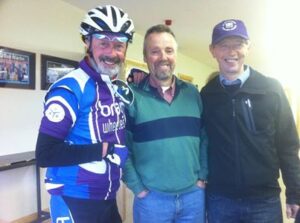 Dermot Brennan, Kevin Metalfe and Brendan O’Leary at the start of the Joe Loughman Randonnee 2013.
by Beryl Gilmore, Club PRO

This weekend saw the running of the Joe Loughman Charity Randonee, run in aid of the Bray Cancer Support group. There was a good turn out as the weather cleared that morning and there was little racing as the race season is in the process of winding down.

Over a hundred riders headed out to ride a tough circuit of Wicklow, starting and finishing in the clubhouse. There were two routes a long route of over 100km and a shorter flatter route of 50km. A great time was had by all concerned, for a good cause and in memory of one of the founding members of the club.

The main racing of the weekend was the Charleville 2 day stage race taking part in North County Cork. Bray was well represented by Colm Ferrari in the A4 race and Geoff Robinson and Odhran O’Caoilte in the A2/A3 race.

All did well on the first stage finishing well up in the bunch. All of the Bray riders improved their positions after a good showing in the 6 kilometre time trial. Heading into the final Stage Colm Ferrari was 12th overall and Geoff Robinson was well in contention in the A2 race.

Colm did really well finishing 2nd in the third and final stage in an extremely close bunch finish. This moved Colm up to 7th overall – a really good result. An upgrade will likely be on the cards for Colm shortly!

A reminder that the bring buy sell and swap night takes place on Thursday night in the clubhouse at 8pm – so if you are looking to get rid of old clothing parts or equipment – or to acquire any – come along on the night.