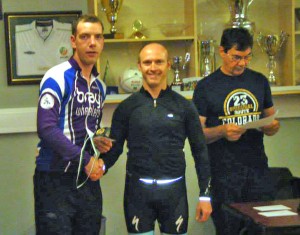 The youth interclub league concluded last week and on Monday evening the prize presentation was held in the clubhouse. Last Wednesday the track league had their prize presentation and also this weekend the senior track nationals took place over Saturday and Sunday also at Sundrive.

At the interclub prize presentation there was a large turnout of youth riders from Bray, Sorrento and Orwell cycling clubs in attendance at the clubhouse. There were medals for all presented by the club president Phil O’Brien. Refreshments were served and a great time was had by all.

On Wednesday night Craig Gilmore collected his gold medal for winning the C league, while Martin Gilmore got third in the same event. Ger Ivory collected a medal for most aggressive rider and Deirbhle Ivory got a silver medal in the women’s league. Sam Gilmore was first under 16 in the B league.

At the weekend several Bray riders took part in the Senior Track National Championships in the pursuit, kilo time trial, sprint and scratch races. Representing Bray were Derek Cunningham, Janos Kohler, Craig Gilmore, Sarah Pratt and Michelle Carter. Sarah Pratt did a good time in the 500m time trial, while Sarah did well in the women’s scratch race. Jason Howick took part in the conclusion of the keirin event which was carried over from a previous date when it had been rained off. Janos did well in the keirin finishing in 4th place overall. The scratch race had a very elite field which included the current World Scratch Champion Martyn Irvine who was showing off his rainbow jersey in a race on Irish soil for the first time. Derek Cunningham did very well in the scratch race, lasting the pace with the world champion, finishing just out of the medals.

Just to remind everyone of our bring, buy and swap night on the 11th September at 8pm.