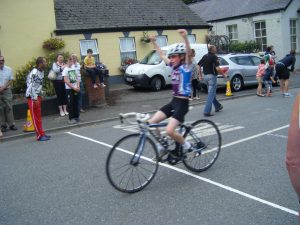 Will Ryan in action.
by Beryl Gilmore, Club PRO

Last weekend young Will Ryan of Bray Wheelers took the big win in the under 12 category at the Errigal Youth Tour. This was a fantastic achievement considering the large international field. Archie Ryan his brother finished in a top 10 position and Ben Docherty, under 14, also did well.

This week the long awaited hill climb championships was held along with the prize presentation afterwards, the Sundrive Track League was ongoing and there were Leinster medals at youth level. There was also open racing for the seniors in Kilmessan and the Vets 50 mile time trial Championships.

It was announced during the week that Bray Wheelers is currently leading the Neenan Travel Track Club of the Year Competition, 2013, with a 10 point advantage over Sundrive Track Team. This is mainly due to the recent medals at youth and team level. This now puts pressure on the seniors and juniors to hold onto the lead in the upcoming track nationals.

The past few weeks has seen several of the Bray riders out training on the hill at Altidore in anticipation of the upcoming Hillclimb Championships. Thursday night gave them a chance to test their times on the short but extremely steep hill. Geoff Robinson was the fastest on the night with Odhran O’Caoilte in second place, Derek Cunningham was third and Mark Murphy fourth. First junior was Anthony Clarke, first under 16 was Sam Gilmore and first lady was Claire McEntee. The prize presentation was held after the hill climb back at the clubhouse with refreshments. Here the prizes were presented for the earlier league races – the main leagues being the Summer League and the Harry Dawson League. Sam McAllister collected his trophy for the Harry Dawson league and Colm Ferrari for the Summer league. Presented with club person of the year was Eamonn Walsh and Volunteers of the year were Beryl and Martin Gilmore.

There was racing in Kilmessan over the weekend with Joe Christian taking 4th place in the Beechmount Cup on Saturday evening.

Saturday the Leinster youth road race championships took place at the County Meath circuit. Will Ryan won the gold medal in the under 12 category with Archie Ryan in 4th place just out of the medals. In the under 14 category Ben Docherty took the silver medal winning the bunch sprint. In a large under 16 field Sam Gilmore rode well finishing just out of the placings in 8th place.

In the Collins/Christie Memorial race Bray was competitively represented by Joe Christian, John Spain, Odhran O’Caoilte, Ruairdhi O’Sullivan and Craig Gilmore in his first ever open race. The Bray riders were unlucky not to place after several crashes slowed their progress.

Rob Magee won the IVCA 50 mile Time Trial Championships in the fastest time of 1’58″14″ in very tough conditions on Sunday.

Congratulations to all of Bray’s winners in the Errigal Youth Tour, the leagues, Leinster youths and in the Vets.