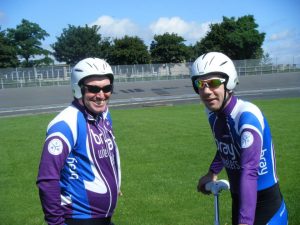 This week brought two National medals back to Bray – bronze in both the Team Sprint and Team Pursuit on the Track. The younger members had the continuation of the underage league with grass track racing in Shanganagh. It also brought about the conclusion of the inter-club league and the inter-club time trial league both of which had been running throughout the summer. The final results of the summer league were also announced and Bray riders were represented at the SERC GP, Mountnugent GP and various leisure events around the country.

Tuesday night saw the conclusion of the interclub time trial league with a 15 mile time trial on the N11, with in first place overall Noel Conway, in second place Anto Dunne and Ben O’Higgins in third place. Sam Gilmore, who did a great time on the night, was first under 16.

The interclub league finished on Thursday night with a lap of the lakes in Roundwood and back to Calary. Craig Gilmore, who is improving every week wasn’t going to be caught and stayed away to win on his own. Anthony Clarke came in second place and Sam Gilmore closely behind in third with Aidan Kelly in fourth place. The overall results of the Interclub league were as follows – 1st Damian Doyle, 2nd Mark Murphy, 3rd Sean Connolly, 4th Sam Gilmore, 5th Sean Greene and 6th Anthony Clarke. First unplaced lady was Muriel Haire, 1st unplaced junior was Fintan Ryan, first unplaced vet was John Dorris and 1st under 16 was Sam Gilmore.

The final results of the Summer League were revealed – Things were very tight at the top with Jason Howick and Colm Ferrari both accumulating the same point totals – Jason however wins overall, as he won race 3 and 5, whereas Colm won Race 4 and just placed in others. So the results are first Jason Howick, second Colm Ferrari, third Rob Magee, fourth Sam Gilmore, fifth Damian Doyle and sixth Sean Greene. 1st lady was Sarah Pratt in the women’s league, with Orla McEvoy in second and Mary Dawson third.

Earlier in the week the underage riders had their inter-club league, which was grass track racing in Shanganagh Park. This was great fun and much enjoyed by all concerned.

The National team events and National Keirin were held at Sundrive Track on Saturday. Bray was well represented at this with two teams in the team sprint and a team in the team pursuit. The Bray A team, which consisted of Malcolm Goggin, Janos Kohler and Jason Howick were third in the team sprint winning bronze and only narrowly missing out on the silver. The Bray team of Janos Kohler, Jason Howick, Ger Ivory and Rob Magee also won bronze in the team pursuit. In the early rounds of the Keirin Janos Kohler and Jason Howick qualified for the next round before torrential rain put a halt to the day. The final rounds of this will be held on September 1st. So congratulations to all our National medal winners – a great achievement.

Several of Bray’s racers were at the South East Road Club GP and the Mountnugent GP on Sunday. Muriel Haire, along with Dermot Brennan and several other leisure riders were at the tour of Kilkenny run by Marble City Cyclers in Kilkenny and enjoyed the sportive around Kilkenny.