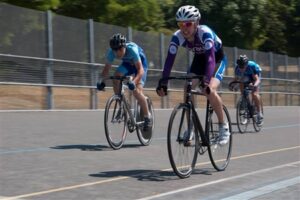 Ben Docherty winning the under 14 Gold in the Scratch race
by Beryl Gilmore, Club PRO

This week saw more good results for Bray Wheelers with the youth riders scooping up medals at the Leinster time trial championships, the final race of the summer league and the senior riders in action at various open races over the weekend.

At the ongoing Wednesday night track league this week in Sundrive Velodrome, Bray continued their domination of the leagues with results for Sam Gilmore in the B group in the points race and Craig and Martin Gilmore and Caoimhe Ivory in the C group and from Will and Archie Ryan in the D group. Craig’s domination of the C group, where he is currently on 30 points earned him an upgrade to the B group. This is a great result for Craig after only a few weeks racing track.

Thursday night at the final race of the Summer league. This took place with three laps of a 46km circuit around Newtown, Killoughter and Newcastle and was always going to be a race for the fast men. In the event, no-one was surprised when the scratch race managed to catch all the groups in front of them and Jason Howick won out in the final sprint with Derek Cunningham in second, Ed O’Brien was third and Sean Connolly in forth. In the women’s league Orla McEvoy was first with Sarah Pratt second.

In the afternoon the youth riders had a road race around a circuit taking in Castlekevin near Annamoe, In this Ben Docherty won his age category, with Will Ryan also winning his – so another two Bray victories.

Also over the weekend Joe Christian finished well up the general classification after mechanical problems on the first day at the Tour of Connaught.

At the Brendan Campbell memorial in Drogheda on Sunday several Bray riders were in contention but were unlucky to miss out in the final placings. Young Will Ryan finished his weekend off with another win in the under 12’s.

There was also a large Bray contingent at the Vets races on Sunday with all Bray riders doing well.