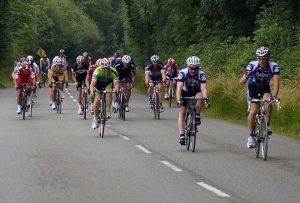 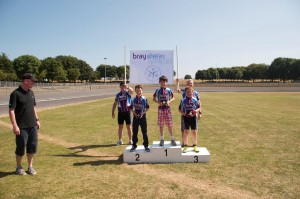 What another great week for Bray Wheelers with gold, silver and bronze medals in the Youth National Track Championships, results in the ongoing summer league, great time trial results and yet another victory in the vets races.

Saturday was the main event in the youth track calendar with the National Track Championships and competitors travelling from all over the country to contest the event in all age categories. There were three events for all age groups, consisting of a sprint, a time trial and a scratch race. In the under 12 category, the prolific winner Will Ryan had a clean sweep across the board, winning gold in all three events. His brother Archie Ryan picked up several silver medals and Thomas Pickford won two bronze medals, his first National medals. Ben Docherty, who is going really well, won gold in the under 14 scratch race and silver in the other two events. Deirbhle Ivory won silver in the sprint event and rode well in the scratch race. Sam Gilmore qualified for the sprint semis and rode well in the scratch race. So a very good haul of medals for the Bray youth riders – setting the club well on the road to winning the Track Club of the Year 2013.

Meanwhile earlier in the week at the track league there was a large contingent of Bray riders picking up points in the league races. Craig Gilmore picked up more points and Bray won the team sprint on the night. This leaves Craig well ahead in the C league, with Martin Gilmore and Deirbhle Ivory in joint third place, Ben Docherty in fourth place and Caoimhe Ivory in fifth place. Ed O’Brien also picked up points in the B league.

The club race on Thursday took place on a route around Roundwood. At one stage of the race it looked as if the scratch and semi scratch group would catch all the groups in front but it was the eight group that did all the damage, catching the groups in front and pulling out more time on the scratch group. The race was won by Colm Ferrarri with Sean Greene in second place, Damian Doyle was third, with Scott Hannon fourth. First lady was Orla McEvoy with Sarah Pratt second.

In the Vets race on Sunday there were several races covering different age categories. In the (a) race Mark Murphy won with Damian Doyle second. Michael Emberley won the (b) race in a hard fought sprint. 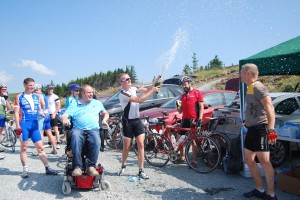 A lot of Bray’s leisure riders took part in the Martin Codyre charity cycle on Saturday – starting and finishing in Bray. A great day was had by all on a tough but scenic route around Wicklow.