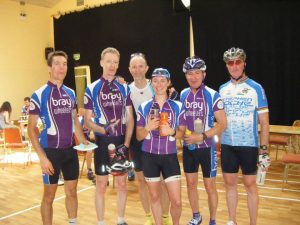 Along with the great weather there were more good results for Bray Wheelers in the National Championships Omnium and at the youth racing in Arklow over the weekend. Also on Saturday Bray Wheelers hosted the Paddy Martin Randonee in fantastic sunshine.

Tuesday saw the continuation of the time trial league with a 25 mile time trial from Calary to Glendalough and back. Some good times were posted on the rolling circuit with Anto Dunne posting the fastest time. He was unlucky not to break the hour doing a time of just 2 hundredths of a second over 1 hour, with Noel Conway in second and Joe Christian third and Jason Howick 4th.

Wednesday the track league continued at Sundrive with a huge contingent of Bray riders – over 20 in total, both youth and senior. The large turnout was in preparation for the upcoming National Championship events. Jason Howick picked up points – with several wins in the A category and Craig Gilmore continued picking up points in the C category. He is currently leading the C category having only taken up track racing a few weeks ago.

Thursday night’s club race took place over the same circuit as Tuesdays time trial. The scratch group caught all the other groups and the race came down to a bunch sprint with Jason Howick winning from Paul Lee, Joe Christian and Rob Magee.

On Saturday the Paddy Martin Randonee took place over 3 distances in the Wicklow Mountains, with a food stop in Laragh. This was in commemoration of Paddy a stalwart of the club for many years, and fondly remembered by many club members. A great day was had by all who took part.

This weekend the National Championship Omnium took place in Sundrive velodrome. This consisted of 6 track events held over 2 days with 3 events on each day. Jason Howick, Derek Cunningham and Ger Ivory took part in the elite men’s event while Michelle Carter took part in her first track Nationals having only taken up track racing recently. Jason Howick finished day one well and went into day 2 in second place overall, but he was unfortunate to finish just out of the medal positions in 4th place at the end of day 2, having been beaten by 1 second in the sprint event by the third placed rider. Derek Cunningham won the men’s scratch race on day 2 of the event. The gold medal in the event was won by Kilpeddar native John Lynch an associate Bray member. Michelle Carter did really well in the women’s scratch race finishing with the bunch and surely this is a sign of a great future at the track for Michelle, considering this was her first major event. The Bray team were ably supported by Ger Ivory, track coach at the event.

Meanwhile the youth riders were in Arklow over the weekend at the Arklow 2 day youth event. The Bray riders did very well on the first day with Will Ryan and Archie Ryan second and third respectively in the under 12 category after the time trial and criterium and Ben Docherty taking the yellow jersey after the first stage, the time trial and holding it for the second. Going into day 3 Ben had major mechanical problems at the start of the race and was unlucky not to hold onto first place, finishing 2nd overall on classification. Will and Archie held onto 2nd and 3rd place in the under 12’s. In the under 16 category Sam Gilmore rode well in the time trial and criterium in a large field of almost 30 under 16’s. At the end of day one he was in 10th place overall. He rode well in the road race on the Sunday holding his position, finishing with the bunch.