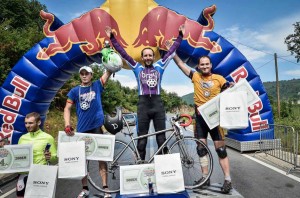 Along with the continued good weather – the great results – both far and wide continued for Bray Wheelers with results in the Vets League road race and at the Red Bull Road Rage downhill race in Bosnia Herzegovina, at Slaney Youth races and at the International Track GP.

First to the international scene – Bray Wheeler Janos Kohler, wearing his Bray kit. won the Red Bull Road Rage downhill race in Bosnia Herzegovina hitting a top speed of 97.3km/h on some sections of the course, in the rain! An amazing result for Janos and congratulations – check out the great photos on the face book page.

The club race this week was an interclub hilly time trial finishing on Luggala. There was a bad wind on the top section of the course which slowed things down. Paul Lee continued his success of last week posting the fastest time of the night, with Anto Dunne second, Derek Cunningham in third place and Joe Christian finishing fourth. First woman was Muriel Haire and first under 16 was Sam Gilmore.

At the Slaney youth races Will and Archie Ryan continued their success placing second and third respectively.

Sundrive Velodrome hosted the International Track GP on Saturday in glorious sunshine. This was the first time in over 50 years that Ireland had hosted a UCI international track event of this calibre. With riders from the Netherlands, Belgium, New Zealand, the UK and Canada, along with our own riders there was sure to be some stiff competition. Derek Cunningham took part in the endurance events riding well in the points and scratch race. Jason Howick took part in the sprint events getting through to the semi final and winning the minor Keirin final. Caoimhe Ivory got second place in a hard fought sprint in the junior women’s scratch race..

In the Vets race on Sunday morning Mark Murphy took the bunch sprint to win the race from his team-mate Ger Deegan in second place. Several of the Bray racers went to Wexford at the weekend racing and were unlucky not to be placed.