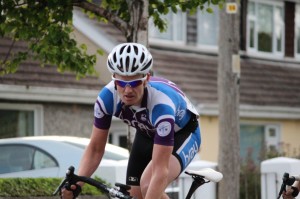 This was a really busy and successful week for Bray Wheelers, with the Club Championships and the hosting of the Christy McManus open race which had been moved from its previous date due to extensive road re-surfacing in the Roundwood area.

Last week Ed O’Brien became Bray’s latest Medal winner when he took the bronze medal in the Leinster Time Trial Championships in Dundalk. Congratulations to Ed on a great achievement.

Wednesday night there was a large contingent of Bray Wheelers at the Stephen Roche GP Criterium race in Meadowbank in Dundrum. The tight circuit made for some very fast racing and great spectating. Rachel Dore took part in the novice race, doing well. In the under 12 race Will and Archie Ryan came first and second, continuing their winning run. In the under 14 race Ben Docherty won a very hard fought sprint to finish in 1st place ahead of the current National Champion. So well done to Ben. Jason Howick, Joe Christian, Derek Cunningham, Janos Kohler, Maurice Dore and Anthony Clarke took part in the fast paced race, rode well, but were just out of the placings. Unfortunately Maurice Dore crashed on the bend during the race and we wish him a speedy recovery.

The Club’s mass start Championships took place on Thursday night in Roundwood. With so many in the club going well this was a hard fought contest. 25 years after he first won the race Mark Murphy took first place on the filter beds, with Geoff Robinson in second place and Paul Lee third. 1st unplaced vet was Sean Connolly. Anthony Clarke won the junior race and Sam Gilmore won the under 16 category. Sarah Pratt won the ladies race, Claire McEntee was second and Orla McEvoy third.

In the Christy McManus race and Roundwood GP on Saturday there was a large Bray contingent taking part, while many others were helping out on marshalling duties. In the Christy McManus Jason Howick signalled a return to form taking second in the bunch sprint to finish in fourth place. John Spain and Ed O’Brien took first and second A3 in the race.

In the IVCA 25 mile time trial championships on Sunday Paul Lee did an absolute stormer of a time 55’15 to win the Vets TT championships. This is an amazing time for the course and is on a par with the best in the country. Rob Magee and Mark Murphy also did personal best times to finish well.

Will and Archie Ryan took part in the Thomas Sheenan race in Carrick on Suir on Sunday. Archie was away in a break for several kilometres and was unlucky to be caught. Will finished in 2nd and Archie in 5th.

Over the weekend Derek Cunningham took part in the Newry 3 day stage race. He headed into the final day in fourth place and with a good stage placing ended the final day the overall winner. Congratulations to Derek on a great stage race win.