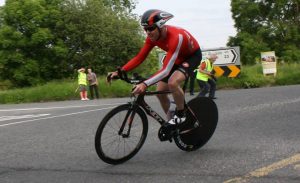 by Beryl Gilmore, Club PRO
The week started out with the interclub time trial on Tuesday night. Unfortunately this clashed with the IVCA time trial championships and as a result the turnout for the interclub TT wasn’t as good as anticipated. This was a 20 mile time trial on an out and back course from Calary to beyond Annamoe and back. John Lynch posted the fasted time on the night, of 44:32, a great time on that course, with junior Fintan Ryan of Sorrento in second place. Anto Dunne of Bray was third, with Brian Harris fourth.

Meanwhile, across in County Kildare, at the IVCA time trial, Bray Wheelers had a fantastic night. Paul Lee stormed home to take the IVCA time trial. Rob Magee is currently leading the vets time trial league and he held onto that lead, with his time on Tuesday night. The fastest time on the night was posted by Paul Lee to put him in fourth place in the league, with Linus Devlin in fifth place overall and Noel Conway one place behind him in sixth overall. In the age standard results Dermot McGrath is top of the league, so great results for Bray in the Vets time trial league.

In the track league this week several Bray riders took part with Sean Lee getting third in the elimination race and Craig Gilmore also getting a third place in the handicap race.

On Thursday evening Ed O’Brien took part in the National Time Trial Championships in Carlingford, Co Louth. Ed posted a really fast time covering the over 40 km course in well under an hour and finishing well up the field.

Thursdays club race started at Calary and finished on the climb of Glenmalure at the top of the climb making for a spectacular finish. At the start of the climb the first group was still away and several of the groups behind had converged with the fourth group catching the third and second. Sam Gilmore, who had started the race in the fourth group stormed up the climb catching all the front markers and finishing the winner on the top with minutes to spare. Claire McEntee, who had started in the third group managed to stay with Sam for some of the way and finished in second. Colm Ferrari finished in third with David Hayes fourth and Sean Greene in fifth.

There were no open races this weekend as the National Championships were taking place. Derek Cunningham took part in the National road race on Sunday. Also on Sunday morning Paul Lee won the IVCA race with Ger Deegan taking second place. Another great Vets win for Paul Lee.