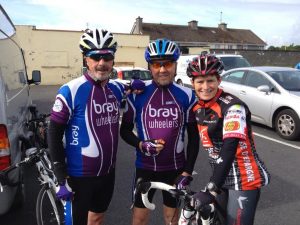 This weeks Thursday club race was an interclub race around the lake in Roundwood and finishing on the hill of Djouce. The first groups stayed away for a while but as expected they were caught on the early part of the climb with David Hennessy taking the win from Mark Murphy in second place and Geoff Robinson in third. Sarah Pratt was first woman home. The next club race is the inter-club time trial league on Tuesday evening from Calary, sign on 7pm.

Joe Christian rode in the criterium in Claremorris on Friday evening but was unlucky to suffer a broken chain.

Saturday Bray Wheelers had expected to run the Christy Mcmanus memorial race and the Roundwood GP in Roundwood, but due to extensive re-surfacing works in the area these races had to be postponed to a later date. It is hoped to run these later in the month. The youth racing that was part of the planned days racing went ahead on a shorter course to avoid the newly re-surfaced roads and was a great success. Bray Wheeler’s under 12 stars Archie and Will Ryan dominated the under 12 race with Will in first place from his brother Archie in second.

Bray was well represented as usual at the Vets racing on Sunday morning with a good turnout of Bray riders.

Also on Sunday Bray Wheelers held a track training day at Sundrive. There was a great turnout of new and experienced riders. It was the first time on the track for several of the Bray riders and hopefully they will return again. Ger Ivory and Malcolm Goggin put everyone through their paces and made the day a great success.

At the Paddy Flanagan Memorial race in Newbridge there were several racers representing Bray and Derek Cunningham placed 3rd A2.

Several leisure riders travelled to Carlow for the humpy 100 sportive, which was billed as a climbing sportive, Dermot Brennan, Kevin Metcalfe and Muriel Haire had a great day climbing the hills of South Leinster.