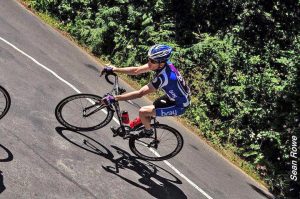 Last weekend was the Elite Road Race Championships hosted by Lakeside Wheelers near Mullingar. Ed O’Brien took part in the Elite men’s time trial Championships on the Thursday evening. There was an illustrious field consisting of most of the countries professional cyclists. Ed acquitted himself well finishing in 16th place in an excellent time.

Sundrives Summer League started on Wednesday night with wins and placings from Sean Lee, Jane Martin and Deirbhle Ivory in the C category, Sam Gilmore, Tony Martin, Edward Kearns and Robert Murphy in the B’s and Harry Brooks and Jason Howick in the A category. Both Tony and Jane bagged wins for themselves in the Kilo dash.

Thursday’s club race was the race with the infamous finish on Glenmalure. Conor Davenport did well getting the win and finishing with time to spare over his next placed rivals. Paddy O’Sullivan finished second with Barry Timmins third, Jane Martin fourth and Mary Dawson fifth.

Sundays racing took place in Bunclody with several members of the club participating in this series of events for all categories. Sarah Pratt did well in the women’s race finishing in eight place overall. John Spain finished well in the bunch.

The underage league starts soon. There are five races in the series, for different age groups, with time trials and handicapped races, all are welcome!! This is a great introduction to various aspects of racing and is great fun.

The league has road, grass, circuit, mountain bike and track racing, with a prize presentation afterwards, with medals for all participants.