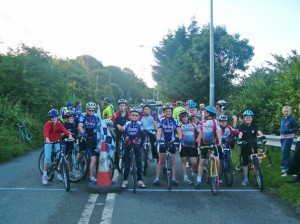 This week the Sundrive Summer League finished with some great racing and the club held its time trial championships on the N11.

At Sundrive on Wednesday night there were several wins from Ben Docherty. Sam Gilmore, Craig Gilmore and Edward Kearns also rode well. Jason Howick had a couple of wins also, to finish the A league in 2nd place overall. The prize giving will be held on Monday evening with some fun racing beforehand.

The time trial championships were held on Thursday night on the N11 on the 10 mile/16 kilometre time trial course. 38 took part which was a great turnout and all categories were hotly contended. There was a strong head wind on the return leg of the time trial which slowed the times overall. First in the senior event was Noel Conway from Ed O’Brien in second and David Hennessey in third. First Vet was Mark Murphy. First woman was Mary Dawson, who is going very well this year from Eilish Bradshaw and Margrete Clark in third. In the junior event Sam Gilmore took first place from Sean Lee in second and Conor Davenport third. Congratulations to everyone and thanks to Eamonn Walsh for organising the event and the marshalls on the night.

The next club race is the interclub time trial next Thursday. See website or face book for details.

Ben Docherty took part in the Conway Baxter youth race in Newbridge over the weekend, doing well and finishing in 5th place overall.

Youth spins are ongoing and details of the interclub youth league have just been released. This league contains a mixture of road racing, circuit races, mountain biking, grass track racing and track racing and skills. The details are as follows –

All youth riders are welcome to take part.